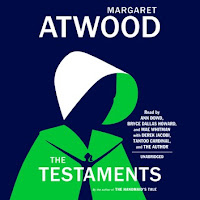 Although I'm not generally a fan of dystopian fiction, I really liked reading The Handmaid's Tale (1985) so I decided to listen to Atwood's new sequel as well. The sequel begins about 15 years after Offred had disappeared.  The story is narrated in the first person by (3) characters. There's Aunt Lydia, the older, slyer, evil villain  who, honestly IMO, saved this story from being a total bomb for me. She's both miserable and memorable. The other narrators were younger women who both seemed so immature and irked me overall. The return to Gilead seemed different this time around with definitely more of a contemporary feel.

(I actually finished this audio a few months ago so my thoughts are somewhat fuzzy as I tried to jot my overall impressions. I'm glad I listened to this one but, it didn't stick with me the way A Handmaid's Tale seemed to.) 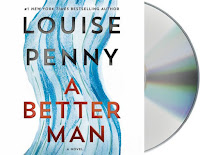 Book # 15 in the Three Pines series, of which, I've read about 7 or 8 of the books.  For me, it's Penny's earlier books that really shine. Her latest books have been just okay for me.  The characters and charming, close-knit feel of Three Pines that fans grew to love seemed absent and the overall story rushed.

Rather than rehashing the plot, of A Better Man, I'll just say that the story took a long time to get moving and there was so much repetition.  The ending, after all my effort, felt unfinished. It made me feel like I missed something  along the way-- like what happened to the art critic?

Overall, I was disappointed and felt like I would have been better off abandoning this book. Instead of reading future releases by Penny, I'll probably go back and read her earlier, charming efforts that I have missed along the way.

Have you read these? If so what did you think?

Posted by (Diane) Bibliophile By the Sea at 2:04 PM