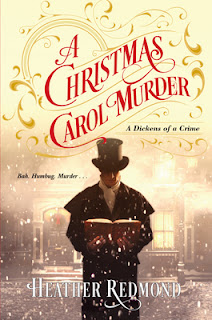 A Christmas Carol Murder; Heather Redmond
Kensington - 2020
This Christmas mystery is actually Book #3 in "A Dickens of a Crime Series."  Although I never read the other two books, this one can definitely be enjoyed as a standalone mystery.
Set in 1835 London, this one had the feeling of a retelling of the original Christmas Carol many of us have read and enjoyed.  There are actually a couple of mysteries going on here. Charles is working as a journalist and amateur detective. As he is covering the story of a fire in which a woman has lost her life, her sister claims that Charles is the father of the newborn baby boy. He is mystified and since he works for his soon to be father-in-law and doesn't want to upset his fiancee Kate, he must find someone to care for the baby while he gets to the bottom of this potential scandal.
The second mystery happens when Charles and fiancee Kate are out for a walk and they witness the body of Jacob Harley tumbling out of a second floor window.  He is also wrapped in chains.  Harley, has a "counting house business" (think loan and mortgage company) with his partner Mr. Screws in the same building. Their relationship has been strained but, Harley had some enemies as well. But, when the body seems to vanish and the ghost of Harley visits Charles or is he just seeing things?
I really thought this was well done, an old fashioned story with a somewhat modern feel as well.  Although I liked this one, the modern feel at times felt off. I liked the Charles character, he was a good journalist and detective who had a way of getting to the truth in a nice sort of way. The descriptions of old London's Victorian era was also great. I thought this was a nice change from Christmas romance fiction.
Rating - 4/5 stars
Posted by (Diane) Bibliophile By the Sea at 7:06 PM