Book Review - The Mistletoe Murder and Other stories; P.D. James 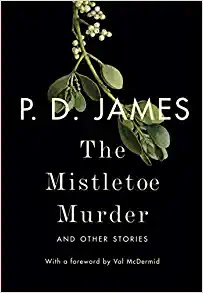 The Mistletoe Murder and Other Stories; P.D. James

P.D. James (1920 - 2014) was one of those authors I always meant to read but, it took until 2020 to try her books.  In this offering, published after her death, there are (4) short mysteries in fewer than 200 pages. The last (2) feature Detective Adam Dalgliesh, a character she featured in (14) earlier mysteries. All of the stories have some merit but, it was the first (2) that I enjoyed the most: The Mistletoe Murder and  A Very Commonplace Murder.

The Mistletoe Murder - was the most descriptive in the collection. It takes place at a remote country estate some (60) years earlier just after WWII.  It tells the story leading up to the murder of a black sheep of a family, needless to say, the deceased cousin was not well liked.  There were not a lot of characters in this mystery so not too many suspects but, still a surprise unraveling at the end. The story was told is the first person, a good character study too.

A Very Commonplace Murder uses a delightful blend of wit and humor. Sixteen years earlier Ernest Gabriel witnessed a crime. However, he was doing something he should not have been doing - spying on a couple. Since he has dirt on his hands, he is reluctant to come forward as a witness for the accused.

The Boxdale Inheritance - a young lovely wife is suspected of poisoning her much older, wealthy husband. She was found not guilty but, the suspicion that she killed him followed her through old age. Sixty-seven years later the case has been reopened at the request of the grandson of the victim since the inheritance may have been ill gotten.

The Twelve Clues of Christmas - Was it murder or suicide?  The owner of Haskerville Hall is dead and it originally appears to be a suicide but, further investigation - (12) pieces of evidence points to murder.

Overall, this was a fun way to spend a few brief hours during the month of December.  While I enjoyed this short collection, I'm not sure I feel motivated enough to go back and read the (14) book series.

Posted by (Diane) Bibliophile By the Sea at 9:42 AM