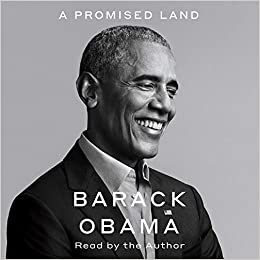 After listening to Michelle Obama reading her memoir, Becoming, I couldn't wait to hear our 44th President Barack Obama talk about his personal and political life.

The first 30 percent or so of this autobiography is very personal.  President Obama talks about his childhood, the early years, school/college and work before getting involved in politics. I especially loved the story of his journey to adulthood and how easily it seemed for him to laugh at himself.  He wasn't afraid to admit to the world how it took a while for him to become a serious student and how he loved to party. Meeting Michelle and becoming a father were clearly defining moments for him and it was easy to see just how much family means to him. Later I liked being transported back to that important address in 2004 he gave to the DNC which moved so many people.  There is so much detail in this memoir especially on important pivotal moments like the 2008 banking crisis.  He admits how affected he was by the Sandy Hook, CT, elementary school, shootings that killed some 20 very young children and 6 adults. How devastated his was when his subsequent attempt to enact a ban on military assault weapons was defeated by a Republican majority in the Senate. This first volume ends with the 2011 raid that killed Osama Bin Laden.

The autobiography, released in mid-November, is massive in scope. There are plenty of fine details about campaigns, cabinet picks and obstacles along the way. In fact this installment is just Volume 1 of 2, the audio is 29 hours and 10 minutes long. My husband and I listened to it together and both enjoyed it a lot. The book was not all political nor was it all about successes. I was impressed at how easy it seemed for the former leader to talk about doubts that have plagued him and, yet it made him come across as all the more human,  humble and introspective. It seemed very easy for him to find some humor even when things didn't go exactly as planned throughout his life. The former President speaks about those things he wished had worked out differently as well.  My favorite parts were the more personal points where he really bared his soul and talked about his love of family. One thing that I did miss was that by listening to the audio, I did not get to see all of the special photographs which are in the print edition but, I've since ordered a copy for our shelves. While I'm not sure when volume 2/2 will be released, I do highly recommended this volume on audio and, we look forward to what comes next.

Posted by (Diane) Bibliophile By the Sea at 8:19 PM