Book Review - When I Hit You; Meena Kandasamy 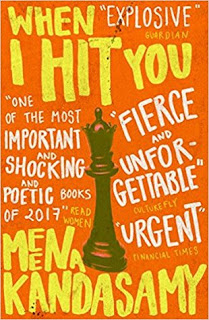 When I Hit You; Meena Kandasamy

The title alone tells the reader that this book is not going to be an upbeat read, yet, for some reason I've always been drawn towards darker stories. This is is dark, raw and not an easy read but, it isn't a very long book either thank goodness - just over 200 pages. It's also somewhat autobiographical.

The story opens up with an unnamed narrator recovering from an abusive marriage at the home of her parents, so we know early on she has escaped her terrible situation.

Set in a small coastal town in India, the narrator is an aspiring writer, talented poet and feminist who was on the rebound from a recent and unexpected breakup.  She marries a college lecturer who professes Marxism. The new husband's outside persona is nothing like the way he behaves when alone with his new wife.  Their home is far removed from friends and family. She's forced to spend all her time at home and he does not allow her to dress in a way that would make her attractive to the opposite sex. Bit by bit he removes all means of communication the wife has to the outside world leaving her a virtual prisoner in the home. He controls everything about her life and their relationship and, she is physically abused as well.

We known she does escape but, the most difficult thing was watching this brute create an environment which allowed him to manipulate this well-educated woman. It was hard to see the wife quickly loses her confidence and self-respect.  The author did a good job helping someone like me who has never experienced abuse see just how difficult and complicated removing oneself from the abusive situation can be. This is definitely not a book for everyone but, I thought it was well done overall.

(purchased as an eBook on Amazon - just 66 cents)

Posted by (Diane) Bibliophile By the Sea at 9:14 AM