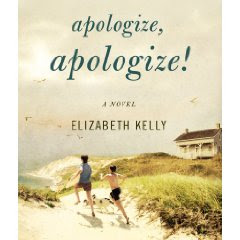 Apologize, Apologize is an off beat debut novel by Elizabeth Kelly. The audio version which I listened to was fairly well done by Jeff Woodman.


In this story, Collie ( yes....named after a dog) Flanagan, tells the story of his eccentric relatives, most of whom are alcoholics living on Martha's Vineyard. Collie is the dullest, but most normal character of the bunch. Anais, is Collie's neurotic, vindictive mother. Charlie, is the father; a heavy drinker, and a womanizing Irishman. Then there is a brother Bingo (also named after a dog) who is the favored son: he flunks out of prep school and he is all charm and gloss. If these characters are not enough to land a few laughs from the reader, there is still a pigeon-breeding uncle and a super-rich grandfather to round out the motley cast. The story is told in wry, apologetic tones.
While Collie, is truly trying to find his place in life, he clearly needs the support of family to help him find his way...something he never seems to find. The true weakness of this story is that the characters are too quirky to be believable (at least for me), and that the story lacks a sense of focus. It seems to move all over the place without satisfactory closure. Despite this there were some humorous scenes that made my struggle with this book a bit more bearable.
RATING - 2/5 - COMPLETED - 5/3/2009
WHERE FROM: My Stacks
Posted by (Diane) Bibliophile By the Sea at 3:14 PM