Waiting of Wednesday: The Calligrapher's Daughter 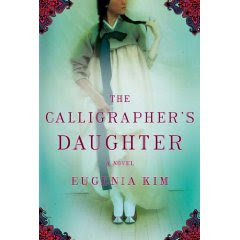 Title: The Calligrapher's Daughter: A Novel


A sweeping debut novel, inspired by the life of the author’s mother, about a young woman who dares to fight for a brighter future in occupied Korea

In early-twentieth-century Korea, Najin Han, the privileged daughter of a calligrapher, longs to choose her own destiny. Smart and headstrong, she is encouraged by her mother—but her stern father is determined to maintain tradition, especially as the Japanese steadily gain control of his beloved country. When he seeks to marry Najin into an aristocratic family, her mother defies generations of obedient wives and instead sends her to serve in the king’s court as a companion to a young princess. But the king is soon assassinated, and the centuries-old dynastic culture comes to its end.

In the shadow of the dying monarchy, Najin begins a journey through increasing oppression that will forever change her world. As she desperately seeks to continue her education, will the unexpected love she finds along the way be enough to sustain her through the violence and subjugation her country continues to face? Spanning thirty years, The Calligrapher’s Daughter is a richly drawn novel in the tradition of Lisa See and Amy Tan about a country torn between ancient customs and modern possibilities, a family ultimately united by love, and a woman who never gives up her search for freedom.

What's your W.O.W. pick this week?

Posted by (Diane) Bibliophile By the Sea at 6:30 AM