Hello Everyone.....since my time on the internet is limited to lunch time at work for now, I wanted to at least do one post, for my regular Tuesday feature.  Saturday or Sunday, I hope to post some photos and tales of woe about our wild and wacky weather in the Northeast this past weekend.

After discovering and enjoying author Elena Ferrante's work recently with The Lost Daughter and The Days of Abandonment, I got my hands on another of her books from the library. This week's selection is: 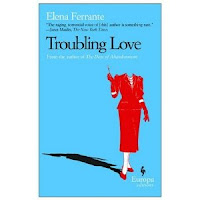 "My mother drowned on the night of May 23rd, my birthday, in the sea at a place called Spaccavento, a few miles from Minturno.  In the late fifties, when my father was still living with us, we rented a room in a farmhouse in that very area and spent the month of July there, the five of us sleeping in a few burning-hot square meters.  Every morning we girls drank a fresh egg, headed to the sea among the tall reeds on paths of dirt and sand, and swam.  The night my mother died, the owner of that house, who was called Rosa and by now was over seventy, had heard some knocking at the door but, fearing thieves and murderers, didn't open it.

My mother had taken the train for Rome two days earlier, on May 21st, but had never arrived.  Lately, she had been coming to stay with me at least once a month for a few days.  I didn't like hearing her in the house.  She woke at dawn and, as was her habit, cleaned the kitchen and living room from top to bottom.  I tried to go back to sleep, but couldn't: rigid between the sheets, I had the impression that as she bustled about she transformed my body into that of a wizened child.  When she came in with the coffee, I huddled to one side so that she wouldn't touch me as she sat down on the edge of the bed.  Her sociability irritated me: she went shopping and got to know shopkeepers with whom in the ten years I had exchanged no more than a word or two;  she became a friend of my friends, and told them stories of her life, the same ones over and over.  I, with her, could only be self-contained and insincere."

What do you think? Would you read this book?
Posted by (Diane) Bibliophile By the Sea at 12:54 PM