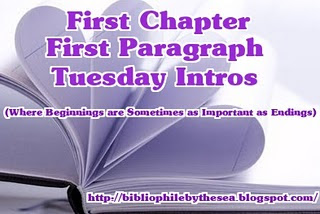 Every Tuesday, I'll be posting the opening paragraph (maybe two) of a book I decided to read based on the opening paragraph (s). Feel free to grab the banner and play along. This week's "intro" is from a book that will be released in January of 2012, by one of my favorite authors: Thrity Umrigar.  Have you read any of her books?

The World We Found

"The tooth broke three days after she received the awful news. There was no blood. No pain, even. For three days she had believed that it was her heart that had broken into tiny fragments, but turned out it was another part of her body that decided to mourn the news. No pain, no blood.  Just a moment of puzzlement as she bit into the soft French toast she made for breakfast this morning and felt something hard and brittle in her mouth.  She spat out two small pieces into her cupped hand.  Adish stared at her for a stunned second and then said, 'Oh no. What happened?'"

Would you continue reading?
Posted by (Diane) Bibliophile By the Sea at 12:05 AM