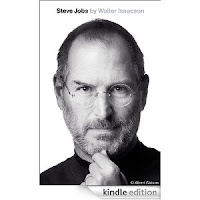 My thoughts - a powerful, yet not entirely flattering biography, of a charismatic, temperamental, narcissistic genius who was driven by perfectionism. (You may wish to skim this review if you plan on reading this book).

Steve Jobs, a man who will not be easily forgotten, passed away on October 5, 2011 at the age of 56.  In 2009, knowing he was dying, he got Walter Isaacson to agree to write a book about his life. Over the course of the next two difficult years of Job's illness, Isaacson conducted over 40 interviews with him, his friends, family and former coworkers.

Jobs grew up in Mountainview, CA, outside of Palo Alto, the adopted son of Paul and Clara Jobs. His biological parents --grad students, a Syrian father and American mother,  he referred to as his "sperm and egg bank". Even when he later found out who his real parents were, he always referred to his adoptive parents as his "real" parents. However, it appears apparent from reading this book, that being abandoned by his biological parents was a real issue for Job's throughout his life, and it affected the way he treated people as an adult.

As a young boy, early on Job's realized he was brighter than his parents. This made him feel more detached. In fact in the 4th grade he tested at a 10th grade level.  Bored with school, he was also somewhat socially awkward and was often bullied at school.  He demanded that he be sent to another school or that he would stop going to school, so his parents moved to a better neighborhood. It was here where Jobs began tinkering with electronics in his garage. This is where is all begin in 1976 for Steve Jobs and Stephen Wozniak. The two were both loners and "music geeks" introduced by a friend. Jobs experimented with pot, hash, and LSD and embraced the hippie lifestyle.  The only college that Jobs had any interest in attending was Reed College in Portland, Oregon. It was at Reed that Jobs became interested in Buddhism, attended a Hare Krishna Temple,and became obsessive about dieting and vegetarianism. He was on a personal unending search for enlightenment, which he never quite seemed to find. Jobs dropped out of Reed College to travel around India on a spiritual journey.

Job's biography covers his 30+ year career which includes not only the start up operation of Apple Computer out his garage, but also his involvement at Atari, Pixar and NeXT. Just four years after Apple's start up, the company went public and was worth 1.79 billion dollars. By the age of 25 Jobs was worth 256 million dollars and made 300 other people millionaires in the process.  In 2011 Apple is a 40 billion dollar Company. Yet despite his wealth Jobs was a minimalist, believing that in home and in business, "simplicity is the ultimate sophistication".

Job's opinion of himself was that "he was special". He had the uncanny ability to read people and to know exactly what their weak points were.  He used that to his advantage, and created a fear factor in those who worked for him. He was eager to put people down, often in front of others, and wasn't afraid to tell those who worked for him that their ideas were dumb. His prickly behavior caused a high burnout in staff, and because of his high expectations his goal in hiring was to find creative, super-smart people who had a rebellious spirit.

He was a genius in business,  but not so much in his personal life. His biography covers his tumultuous relationship with daughter Lisa who he fathered out of wedlock in 1978, to his marriage in 1991 to Laureen Powell and the birth of his first child that same year, who for the first two weeks of his life was known simply as "baby boy Jobs".  In 1995 and 1998 two more children, daughters were born to Steve and Laureen.  His was described as aloof to his daughters and often "prickly" to his wife, thus by no means an easy man to live with.

His illness,was first diagnosed in October of 2003, with what was believed to be, a curable form of pancreatic cancer. Jobs decided against surgery despite the urging of his doctors and those closest to him. Instead he chose to try some radical diets and fastings in the hope they would cleanse his body of cancer. His was obsessed with body image and did not want to have a surgery he believed might not be entirely necessary. The nine month wait caused his cancer to spread, and his health and quality of life would deteriorate as well, ending with his death on October 5, 2011.

Steve Jobs is a fascinating read about a complicated and extremely fascinating man. As prickly as this man could be at times, there are a few paragraphs that were able to bring me to tears.  Apparently, according to Jobs, much of your thinking is changed in the face of death, and suddenly you no longer worry about "having something to lose."

A highly recommended read.
Posted by (Diane) Bibliophile By the Sea at 11:22 AM