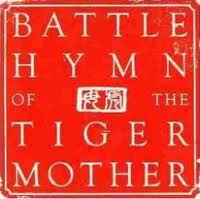 Battle Hymn of the Tiger Mother is the brutally honest memoir of a Chinese-American mother, and how the Chinese parenting style, she used to raise her two daughters, is so different, and in her opinion, superior to the way most Western parents raise their children.  In the author's opinion, Western parents were too easy on their children, and too worried about their self-esteem.  The result is often soft-hearted, thin-skinned children instead of tough resilient ones.  Western parents, according to Chua, don't push their children enough to be the very best they can be, and she claims that they also allow their children to make too many of their own decisions.  According to Chua, Western children often select activities that she deems are not in the child's best interest. Examples of these are,  cheer leading, drama club or any other sport or activity that you can't win a medal in.

Amy Chua and her husband Jed Rubenfeld, are both Yale Law professors and authors. The couple agreed early on that Amy would decide on the parenting style for their daughters, and as for religion, the girls would be raised Jewish like their father Jed, even though Amy was raised Catholic.

High expectations, and respect for authority were a given, and the girls were raised to believe that "nothing is fun unless you are good at it". To achieve this, one had to work hard and endure long hours of practice, practice and more practice. After school the girls often had to practice up to (4) hours each evening.  Building confident and successful children was all that was important to this mother. When it came to studies, a grade of (A-) was unacceptable. The girls, Sophia, the oldest, and Lulu, the younger child, were never allowed to have play dates, sleep overs, watch television, be in a school play, play computer games, nor could they choose their own extracurricular activities. Friends outside of school were not allowed, as they had to fit them into a busy schedule, often  for a year in advance.  In school, not being #1 was never an option.  The only subjects that were not important to Amy for their daughters was gym and drama -- in Amy's world, if you couldn't win awards it wasn't something worth spending time on.

Sophia was always respectful and eager to please her parents, she was tops in her class gifted as a Suzuki piano student.  She was subjected to rigorous lessons, special teachers and the girls even had to practice when the family vacationed.  Amy even chose hotels based on whether a piano would be available for Sophia to practice on.

Lulu was also highly intelligent, and a talented violinist, but she was a rebellious child with a mind of her own. She was a girl who often went head to head with her mother with neither willing to back down.

I'm not going to elaborate on the parenting methods Amy Chua used on her girls.  You probably wouldn't believe me, and you really should read this book for yourself.   At times while reading this book, I felt a bit like a voyeur, peeking into the windows and looking at the daily life of this family. Honestly, had that been the case, I probably would have called CPS (Child Protective Services) on at least a couple of occasions about this mother.

Although her tough Tiger Mom style seemed, in most cases, to produce the results she was hoping for, I wonder what price the girls paid emotionally in their attempts to please their mother, and how she will be remembered by the girls later on.  It always seemed like nothing they did was good enough for their mother, and that they could have done better.  Even though the reader did learn a little about Jed, the girl's father, and the way he was raised as a child, I got the impression that Jed rarely interfered with the demands placed upon the girls by their mother.

Do I recommend this book? Absolutely, even though I don't agree with her parenting style,  and I also thought she carried this huge chip on her shoulder.  Perhaps a blend of Chinese and Western parenting styles might be the answer to raising a smart, self-confident and sane child.
Posted by (Diane) Bibliophile By the Sea at 10:39 PM

Email ThisBlogThis!Share to TwitterShare to FacebookShare to Pinterest
Labels: memoirs