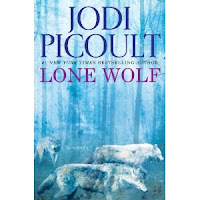 
Jodi Picoult, is an author known for her novels dealing with complex and controversial issues,  Her 19th novel, Lone Wolf,  just released.  The story for the most part takes place in Beresford, New Hampshire, and once again, it's a story which packs a punch.

When Cara Warren, age 17, calls her father, Luke to pick her up after being out with friends who have had a bit too much to drink, father and daughter are involved in a serious automobile accident.  Where Cara recovers from her injuries after surgery, her father is not so lucky. Luke has suffered a TMI (traumatic brain injury) and has only a 10% chance of recovery.  He is being kept alive by life support -- a ventilator and feeding tube.

Luke is divorced from Cara's mom Georgie, and has been estranged from their son Edward for the last six years.  Edward, left home at age 18, after an incident involving his father Luke.  He left a note for his mother, but never bothered to said goodbye to his father.  When Edward receives a frantic call from his mother, Georgie, informing him about his sister and father's accident, Edward takes a 24 hour flight home from Bangkok, Thailand where he has been living and teaching.

With no legal advance directives in place for Luke, the siblings find themselves at odds over whether or not to end their father's life, and a legal battle ensues.  To complicate matters, Edward locates a handwritten note of his fathers, giving him the authority to make decisions for him if he were ever unable to make them for himself. Edward was just 15 at the time that both parties signed the note.  It was signed at a time when Luke, a man with a Zoology degree who loved the great outdoors, had decided to leave his family to spend (2) years in the Canadian forest living among the wolves and studying wolf migration.  The same man who use to tell his children that if he could have chosen to never interact with humans again he would have. ---According to Luke, "animals don't disappoint as humans do."

----" A wolf pack is like the Mafia, everyone has a position in it; everyone is expected to pull it's own weight."

---"My father taught me wolves can read emotion and illnesses the way humans read headlines."

The story is told in alternating chapters by the characters.  Luke, Georgie, Cara, Edward, and Georgie's new husband Joe, an attorney.  All of the characters were developed, most were sympathetic, and each interesting and complex in their own way. Some of the characters have baggage and secrets, each has a story to tell. I enjoyed all of their stories however, in my opinion, it was with Luke's character that the author outdid herself  with some powerful characterization -- simply fantastic.

As I read the chapters from Luke's POV, I was moved by all that I read about the world of wolves, and interesting dynamics between pack behaviors, and human behavior.  Throughout the story Luke compares how wolves versus humans might have reacted in a particular situation. It is obvious that Picoult did her homework while researching the behaviors of wolves with experts in the field. Luke's childhood and young adulthood, his life as a husband and father, is ever-so-interesting, as is the in-depth account about his life spent among the wolves.  A man who many people thought of as a genius, while others thought of as insane.  The writing in this area is riveting!  I loved how the author was able to demonstrate Luke's less than perfect parenting skills, but yet his unquestionable love for his children.

---"People assumed that the reason I walked away from the pack that day was because of the harsh conditions had finally become overwhelming -- the weather, the cold, the near starvation, the constant threat of predators.  But the real reason I came back is much simpler.  -- If I hadn't left at that moment, I know I would have stayed forever".

As you can probably tell, I really loved Lone Wolf. It was at times both thought-provoking and emotional.  Especially heartfelt was watching what Georgie had to endure, as she witnessed her two children battling over their father's fate.  This page-turner should make for some lively book club discussions. Highly Recommended.
Posted by (Diane) Bibliophile By the Sea at 6:00 AM