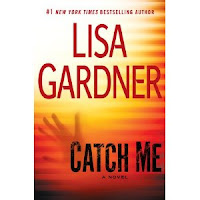 
In Lisa Gardner's newest novel, released earlier this week, several characters from Gardner's previous novels return, including, Boston Detective DD Warren.  Warren is back to work after the birth of her son, and shes back into action at the scene of a murder.  It is here that she is confronted by a woman who claims that she is going to be murdered in just (4) days. The woman is Charlene Rosalind Carter Grant, and she has reason to believe she is next on a killer's list. Charlene wants to be sure that DD Warren, one of Boston's best investigators will find her killer after she is dead.

Charlene (Charlie) grew up with a psychotic mother, and at an early age she witnessed plenty of violence including the death of (2) siblings.  When her mother is finally put away, Charlie is taken in by an aunt who lives in New Hampshire.  In NH, Charlie has (2) best friends and the girls do everything together. But even with best friends, some secrets are too painful to talk about, so Charlie's friends do not know what she has endured.  After high school the friends start separate lives, but Charlie has no plans for college, so she stays behind to help her aunt run her B&B.  The demons of her childhood, however, are never put to rest. She recalls the vivid details of things she witnessed as a child.

After Charlie learns about the murders of her best friends, (1) year apart, in different states, but on the same day and same time -- 8:00 p.m. on January 21st, she fears she must be the killer's next victim.  There seem to be no clues, no forced entry and no motive.  Not only does Detective DD Warren have this case troubling her and January 21 quickly approaching, but there are pedophiles luring young children via the internet. These pedophiles are turning up dead as well.  As the detective begins to look into Charlies background she has several questions she will need answers to, making DD Warren and the reader wonder if Charlie has something to hide?

This is one of those psychological thrillers that had me guessing until the end, and only toward the very end did I finally figure this one out.  It's the kind of story that if read by parents of young children, it will open their eyes to some of the tactics used by pedophiles to lure young unsuspecting kids, and it might make you think twice about what your children are using the internet for.

Although this book is part of a series, it could be read as a stand alone without confusing the reader. I've read all of this author's work, and Catch Me is certainly a page-turner I think many readers might enjoy.