No Buddy Left Behind; Terri Crisp and Cindy Hurn 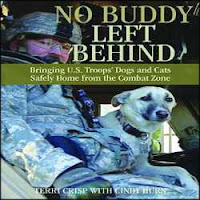 No Buddy Left Behind: Bringing U.S. Troops' Dogs and Cats Safely Home from the Combat Zone, was such a wonderful audio book experience.  Pet lovers everywhere will be able to relate to the lost, lonely, empty feeling that most likely would hit us if we had to leave the country and also leave behind our animals that have helped us through many sad and uncertain times.

In the midst of a country torn apart by war, American Soldiers forced to leave their families behind in the states, tried to make the best of a very difficult situation.  Loneliness and depression were often commonplace, and although soldiers were forbidden to befriend stray animals they came in contact with while fighting a war, the rules were often bent to give the servicemen something positive, something to care about and look forward to at the end of their long days.

With a genuine concern for what would happen to the soldier's new best friends, when they left Iraq and Afghanistan, several military personnel contacted Terri Crisp, International Program Manager for Operation Baghdad Pups with the SPCA International to plead their case as to what their new companion meant to them, and why their animal should be shipped back to the U.S.

Although there is strict criteria which needs to be met,  if the animal is eligible for the program, the organization provides all of the veterinary care, and makes all the necessary transportation arrangement to make things go as smoothly as possible.  Since 2008, Terri, along with a team of dedicated volunteers rescued and transported some 280+ animals out of  the war zone and eventually into a loving home of a serviceman or their family members.  This book tells not only the personal stories of what the military personnel have endured while at war, but it also tells the stories of what the animals (mostly dogs and some cats) have endured. Despite the conditions the animals endured, they still were able to give something back to those who rescued them. It was a win -- win for man and their 4-legged friend. The stories are very personal, and although for the most part heartwarming, there are sad moments when tears were shed as well.  I loved everything about this book, and I especially enjoyed the afterward, in which we learned a bit about what life was like once the animals had homes in the States. What a wonderful organization! What a wonderful book!

A must-read or must-listen to for animal lovers everywhere.
Posted by (Diane) Bibliophile By the Sea at 10:42 PM