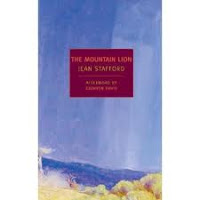 "RALPH WAS TEN AND MOLLY WAS EIGHT WHEN THEY HAD scarlet fever.  It left them with some sort of glandular disorder which was not malignant, but which kept them half poisoned most of the time and caused them, frequently, to have such bad nosebleeds that they had to be sent home from school.  It nearly always happened that their nosebleeds came at the same time.  Ralph, bleeding profusely, would stumble into the corridor to find Molly coming out of the third-grade room, a handkerchief held in a sodden bunch at her nose.  Their mother could not bear the sight of blood and her distress, on seeing them straggle up the driveway, never lessened even when these midday homecomings had become a habit.  Each time, she implored them to telephone her so she could send Miguel, the foreman, in the car.  But they never did, for they liked the walk home, feeling all the way a pleasant superiority to their sisters, Leah and Rachel, who were still cooped up in school with nothing to do but chew paraffin on the sly."

Has anyone read this one? If not, would you continue reading?
Posted by (Diane) Bibliophile By the Sea at 5:30 AM