We the Animals; Justin Torres 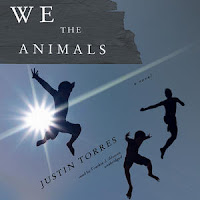 We the Animals is a coming-of-age story about (3) young brothers of mixed-race parents, growing up in a poor, and abusive home in upstate New York.  It's one of those rare stories that was just so well written, it is sure to stay with me for a long while.  Unabridged on just (3) cds, or under (150) pages in print, this story packs a punch.

The story is narrated by the youngest brother, just 7, whose name is never revealed, a boy who seems to adore his older brothers just  9, and 10, when the story begins.  Told over a period of (6) years,the novel covers significant childhood experiences, often jaw-dropping, that the brothers witnessed or experienced while living with their mixed-race parents, "Ma and Paps". Parents who married and became parents when they were still in their teens.

Paps is often unemployed and takes his anger out on his family.  Ma works nights at a brewery, is often depressed and distant.  The parents fight, kiss and make up, fight, over and over again while the boys witness it all. The house is often without food, so the brothers scrounge for scraps and run around wild and unsupervised. The title seems so appropriate -- We the Animals, is brief, but intense.


" And when our Paps came home, we got spankings. Our little round butt cheeks were tore up: red, raw, leather-whipped. We knew there was something on the other side of pain, on the other side of the sting. Prickly heat radiated upward from our thighs and backsides, fire consumed our brains, but we knew that there was something more, someplace our Paps was taking us with all this. We knew, because he was meticulous, because he was precise, because he took his time. He was awakening us; he was leading us somewhere beyond burning and ripping, and you couldn’t get there in a hurry."
It seems so inappropriate to say I enjoyed this book, because it left me with a feeling of sadness.  It made me think of just how many children grow up with this level of dysfunction in their lives.  Readers who gravitate toward coming of age stories, especially ones about children growing up in an abusive and highly dysfunctional home, should appreciate the writing talents of this new author.  The only reason that I gave this book a 4.5/5 instead of a 5/5 was because I was not thrilled with the ending.
Posted by (Diane) Bibliophile By the Sea at 10:14 PM