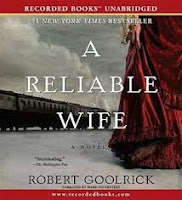 
The Reliable Wife is a story which seems simple from the start. Ralph Truitt, is a wealthy, lonely, man who is looking for companionship, without romance.  It's the winter of 1909 in rural Wisconsin, Ralph has no family, his wife died 20 years earlier, so he places an ad for "A Reliable Wife."  Catherine Land answers his ad, stating that she is a simple woman of modest means. Deep down she is anything but, and little does Ralph know, she has other plans. Her thoughts are to work on a plan that will make her a rich widow rather quickly.  Ralph Truitt hasn't been exactly upfront and forthcoming about his past either, and together they make for a couple of truly unlikable characters --- at least at the beginning.
Trickery and deception aside, both are wounded souls desperate to survive. Each make for pretty intense characters. It is their thoughts and actions that drive the novel along, as the reader learns more about Ralph and Catherine's past.  Sexual tension and frustrations are intense throughout this novel, but it is extremely well done and this too tends drive the story.  For me, the story dragged a bit at times, but then a twist or new revelation would surface and I had to keep listening. Before too long my feelings for the characters began to change as their sad pasts were revealed.
Normally, this would not be the type of book I would choose, but I downloaded it on audio several years ago and decided to give it a try.  The audio is very well done, it's narrated by Mark Feurstein. It's not a terribly long novel, and overall, I was happy that I kept listening. Readers who love character driven stories, flawed characters, stories about revenge, redemption with a heavy dose of lust, as well, should enjoy this book.
Posted by (Diane) Bibliophile By the Sea at 8:56 PM