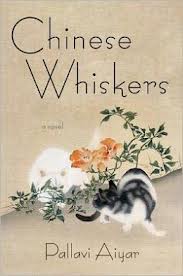 
I wasn't sure what to expect going into this novel other that knowing it was narrated by (2) cats who live in Beijing. I was thought might be a pleasant change from all the stories I've read that were told from a dog's perspective.
The (2) cats are former strays who have lead very different lives prior to be adopted by a foreign couple who named them Soyabean and Tofu.  Soyabean is a ginger-colored, handsome male -- picture future model for a pet food company. He grew up as a stray in a middle class area. Life on the street was easy for him compared to that of Tofu.  Tofu, is a petite dark colored female. She was the only female in a litter of five and sadly had been a dust bin kitten.  A kind old man fed her mama scraps of food and an occasional bowl of milk , but life on the streets was rough.  Tofu's mom told her and her brothers that they were descended from royalty and that she had a wealthy life-style until the communist revolution changed things.
Their new owners were kind to the two cats and fed them well, but suddenly their world changes when the SARS outbreak hits, and,  the tainted pet food scandal makes it unsafe for cats to roam outdoors. Hysteria runs rampant and stray cats everywhere are being rounded up.
In a nut shell, this book was just okay IMO. Told in alternating chapters from each cat's POV, I initially enjoyed the insight into the Chinese culture and beliefs.  Some of the cats musings left me with something to thing about, however brief. Added to the book was a short glossary of Chinese words and their meanings which was a plus.The story seemed a bit strange overall, but in the end the cat's triumph.
Posted by (Diane) Bibliophile By the Sea at 5:30 AM