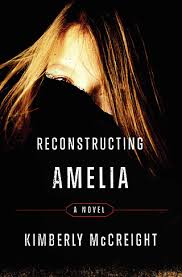 
Part coming of age story, part mystery, Reconstructing Amelia is a story that pulled me in early on.

Amelia is the fifteen year old daughter of single mom Kate Baron, a high powered Manhattan litigation attorney.  Amelia is funny, has friends, is smart, an honors student, who attends Grace Hall, an elite private school in New York.  So naturally when Kate gets a telephone call from the school saying that Amelia has been suspended for cheating, she can't believe what she is hearing.  Kate is told to come and get her daughter. As shocking to Kate as this may seem, what happens next is every mother's worst nightmare.  When she arrives at the school a short time later, she is told her daughter is dead after jumping off the roof of a building. The police call it suicide, but that changes when Kate received an undisclosed text message which reads: "She Didn't Jump".

What really happened to Amelia?  The story is told through both the viewpoints of Amelia, before her death, and Kate after her daughter's death.  The police reopen the case and, the remainder of the novel keeps the reader guessing as to what happened to Amelia and why? Set in the present day of texts, Facebook, and blogs, the story covers the gamut of teen issues: mean spirited teens, bullying, hazing, sexuality as well as other sensitive issues.  The characters were fairly well developed, a few were ones I despised. I think I know how the term "snobby rich kids" got its bad rap.

For the most part, I liked this debut novel, but not the way it jumped around from past to present.  I think this story will be a hit with readers who enjoy YA novels, although some of the subject matter is for mature readers.

Posted by (Diane) Bibliophile By the Sea at 7:27 PM