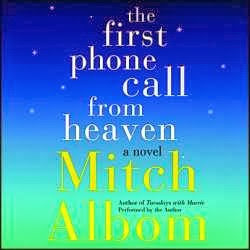 Mitch Albom's latest novel, First Phone Call From Heaven had an interesting premise, just the idea of a loved one communicating with us from heaven gave me a warm and fuzzy feeling. The truth is I started this audio book in January but was having a hard time with it so I took a few weeks off from it and then tried again.  This time I did finish, but found it to be a struggle. I read Tuesdays With Morrie (loved that NF story), but this work of fiction just didn't work for me. The audio version was read by the author and I thought he did an okay job.

For those who haven't read this one, several residents of a small town in Michigan begin receiving phone calls from relatives who have passed on, and soon a media circus follows. Why were certain people chosen to receive the calls, and are they real or some sort of a cruel hoax? The calls are brief, lasting only a few minutes, and they seem to come on the same day of the week.  One non-believer, Sullivan (Sully) Harding, an ex-navy pilot is struggling with his own demons. His wife died in a car crash on the day he crashed a plane.  He blames himself for his wife's death, which left him with a young son who misses his mom deeply. He's determined to find out where the calls are coming from and prove this is all a hoax.

Although some of the characters in the story were somewhat interesting, the story is dialogue driven which made the flow seem awkward and sentences short and choppy. Based on the subject matter, I was hoping for a story that would pull at the heartstrings, but that just didn't happen. There was also some history about Alexander Graham Bell and the telephone patent, which I found to be mostly annoying. Unfortunately, I can't recommend this one.