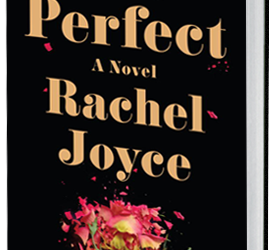 
After falling in love with Rachel Joyce's debut novel The Unlikely Pilgrimage of Harold Fry, I was anxious to try PERFECT. The protagonist of this story is eleven-year old Byron Hemmings.

One foggy morning in the summer of 1972, Bryon's mother is driving him to school at Winston House, and something terrible happens.  It's an event which deeply affects Bryron and yet for some reason his mother does not even seem to notice what has happened. Byron feels in some way to blame, as he was the one who distracted his mother by wanting her to look at his watch, believing time was going in reverse.

As weeks pass and no discussion takes place about what had occurred, Bryon is at a loss of what to do or how to bring up the subject with his mother. Is it possible that his mother, Diana, is not even aware of what has happened? Yet for some reason she seems to be changing before his very eyes. She takes up an unlikely friendship with the one woman she probably should be avoiding. Does she really realize what has happened and is this her way of dealing with her guilt?  One thing is sure Bryon's "perfect" world as he knew if is shattered.

Bryon, an unpopular young boy, finds comfort discussing what has happened with his one friend James. Unfortunately, his friend James soon seems to be experiencing some troubles of his own. Anxiety, rituals and fear of other people soon separate the two boys as James is institutionalized.

Told in split narrative through Byron as a young boy and later James as a grown man, it is clear early on that their stories are somehow entwined. Diana was also a central character, a woman with much internal conflict. She was quite complex and interesting.   Her husband Seymour, who played a small part, was a piece of work. The story was cleverly written and compelling yet very different from Rachel Joyce's debut novel. I loved the descriptions of the British countryside, but the details of James sad situation were especially difficult and was sad listen to at times.

Paul Rhys narrated the audio version and did a very good job.