A Visit From the Goon Squad; Jennifer Egan 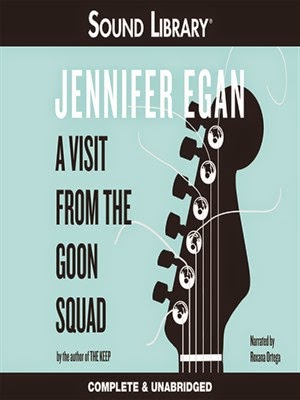 A Visit From the Goon Squad; Jennifer Egan
Sound Library - 2010


When A Visit From the Goon Squad was first released in 2010, I recall quite a bit of hype over this novel and the fact that the author, Jennifer Egan, was award the Pulitzer Prize for her work as well.  I put it on my list and finally got to it .  The story started out with promise.

Sasha, a young woman in her mid-thirties, has had a troubled life. While she meets with her therapist at his office in NYC, we learn that the stealing is not because she needs or even wants something, it's just something she can't seem to resist. It has long been a problem for her. There is a somewhat funny incident in a rest room where she picks up a wallet a woman left on the counter and when she finds the woman frantic she gives the wallet back, begging her not to say anything. Sasha works for an aging record executive and former punk rocker at Sow Ear Records.

Just when I was getting invested in Sasha's story, she pretty much disappears from the novel. Then all sorts of crazy characters, there must be 10-12 of them, begin to appear and disappear from the story. The story jumps from present to past and back again, and the points of view change as well. Their stories are mostly centered around rock and roll.  The novel was just too disjointed for me for follow in audio format, and honestly, maybe I think I am just getting a bit too old for this type of story and writing. I doubt that I would have liked it even if I had read the print edition. Very disappointing.

Have you read this one?

1/5 stars
(Library Audiobook)
Posted by (Diane) Bibliophile By the Sea at 7:14 PM