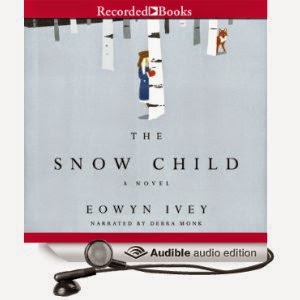 
The Snow Child takes place somewhere around the 1920s, and tells the story of Jack and Mabel, a couple approaching 50 who moved to this Alaskan territory for a new way of life. Mabel is unable to have a child of their own after suffering a stillbirth back in Philadelphia.  Feeling like they need a fresh start, they move to wilderness Alaska. Knowing that living in the wilderness will mean hard work, something which the couple is not afraid of, they are not prepared for the harsh weather and food scarcity they face in their new surroundings.

Instead of the new area being a refreshing change of pace from their past in Philadelphia, life is rough and depressing. One day Jack and Mabel build a snow girl out of snow and decorate it with a warm red scarf. When morning comes the snow girl is gone but Jack finds child-sized footprints in the snow, and later, he sees a red fox and a young girl running through the snow. The girl is wearing the red scarf. Just who is this young child running through wilderness country in the freezing cold?

For a good portion of the novel the only people who see the child are the couple. She comes and goes and seems to disappear for long periods when the snow melts. Her name is Faina. When Mabel mentions the girl to her friend and neighbor Esther Benson, the woman wonders whether Mabel had imagined the girl rather than actually having seen her.

The story is based on a Russian fairy tale called The Snow Maiden, where a snow figure comes to life and draws her makers into its magical world. The Snow Child is a different kind of story about having hope when all seems lost. I don’t read a lot of books with magical realism, so I was surprised that I did enjoy listening to this novel, which was read by Debra Monk. I thought the writing was very descriptive, but felt the story itself a bit too long to sustain continuous interest (about 400 pp).  I loved how Mabel and Jack’s relationship had its highs and lows and eventually seemed to blossom again over the 10+ year time span of the story. The Alaskan terrain is beautifully captured, but in the case of foraging for food, killing a moose and chickens, I was upset by the fact TMI was detailed. I suspect that animal lovers will be troubled by this aspect of the novel. If you haven’t read this one yet, it's a good choice for a chilly or wintery weekend.