Good to a Fault; Marina Endicott 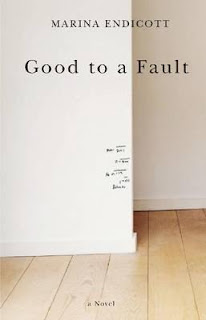 
Clara Purdy is a 43 year old woman whose life is stuck.  She never went to college,  has worked for the same insurance company for over 20 years, and although she married, her marriage ended after only 8 months.  People see Clara as sad and perhaps she has a reason to be that way. After her marriage ended she came home to care for her sick parents, who are now deceased. Her life now consists of work and then returning to the tiny bungalow that once belonged to her parents.

As the novel opens Clara is driving to the bank and thinking about the sorry state of her life. As she makes a left hand turn, her car is involved in a significant crash. The occupants of the other car are the Gages, a homeless family who have been living in their car: mother, father, grandmother and 3 young children, the youngest is just 10 months old.

Although no one is seriously injured, there is a lot to figure out for this family.  Clara feels guilty even though she is told by the mother that the accident was not her fault because her husband had sped through a yellow light.  However, Clara can't seem to shake the feeling that she can't just walk away, especially after she learns that Lorraine has late stage lymphoma and will need to begin chemo.
Clara decides to take a brief leave of absence from work and bring the family home to stay with her until they can get on their feet.

Initially Clara is thinking that the situation will be temporary but, after the father, Clayton, takes off during the first night, the difficult grandmother being of no help whatsoever, Clara isn't sure what to do.  She begins to get attached to the children as well and she doesn't want to have to get social services involved, so her situation begins to get much more complex than she ever imagined.

This book moved along slowly for me but, it gave me so much to think about. I couldn't imagine taking in a whole family of strangers like Clara did. Even though Lorraine's family and Claras help a bit, the burden for the most part belonged to her. I thought the characters, especially Clara, Lorraine, Clayton and Paul (a priest) gave readers plenty to discuss making this a good choice for book clubs.