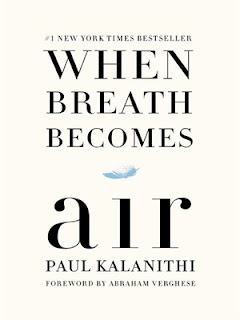 
Cancer took the life of neurosurgeon, Paul Kalanithi, in March of 2015 at the age of 37, this is his story.

The story begins with Paul, who is in his last year of residency at Stanford in 2013, and his wife Lucy, also a physician, reviewing his CT scans.  He's confident looking at the films that he knows the diagnosis - Stage IV, metastatic lung cancer.

His death sentence diagnosis forced him to make some tough decisions and lay out some plans for the time he might have left. Paul always had a love for literature and hoped to someday write. His undergraduate degree was in Literature and Biology.  Paul began this book during his illness and his wife fulfilled his wish to see it published after he passed away.  Paul writes of his youth as a child of Indian immigrant parents, how he met his wife, his medical training and his interactions with patients who too were dealing with their own mortality.  As his own life was slipping away, he and wife Lucy decided to have a child and although very ill, he did get to see his newborn daughter and spend the greater part of a year with her.

Paul's writing feels genuine and insightful, and his interactions with patients felt compassionate.  I found the epilogue and acknowledgements by his wife Lucy to be moving and heartfelt as well.  This is an important story that demonstrates, "how we live" and, "what we do with our life" is of greater importance than "how long we live."

The audio books is read by, Sunil Malhotra, Cassandra Campbell, Abraham Vergeshese who did an excellent job.