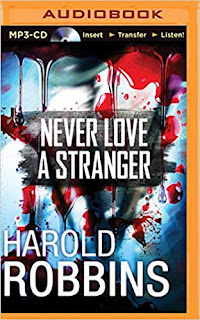 Earlier this month my husband and I listened to Harold Robbin's A Stone for Danny Fisher. a first Robbin's book for me, and was I impressed. For years my husband raved about this author and Danny Fisher was his favorite book.  Our next selection was Robbin's debut novel, Never Love a Stranger (1948).  This was an enjoyable listen (read by Will Patton) but, the story was not quite as good as Danny Fisher.

Set in the 1920's and 30s, Francis (Frankie) Kane was an orphan whose single mother died in childbirth. He grows up in a Catholic orphanage in New York.  When it's discovered he has aunt and uncle they take Frankie in and are very kind to him. However, when health problems affect his uncle, they are forced to move to Arizona and are not allowed to take Frankie out of the state of New York, so back to the orphanage he goes -- until it is discovered that he is Jewish feels forced out, by then he is a teen.

Out on his own, confused and feeling rejected by the world at large, the young Frankie quickly toughens up and does what it takes to survive. On the streets he meets Silk Fennelli, the boss of all the numbers rackets and other shakedown scams around the city.  Silk sees Frankie as an honest young man and someone who needs money. Silk begins to test him within his organization of crime.

Told mostly through first person flashbacks, it was  easy to see how Frankie fell into the life of crime. He was a sympathetic character overall. As is true of most of Robbin's books: crime, beautiful women and to a lesser degree sex seem to be his signature trademarks, this one was no exception. This story was very detailed, which enables the reader to get a better feel for the characters.  We enjoyed this story but felt it wasn't perfect, as some questions remained once we got to the end.  I will admit that the ending Robbins chose brought a tear to my eyes.  Next up for our Harold Robbin's audio will be: Memories of Another Day (1979).

Have you ever tried this author?

Posted by (Diane) Bibliophile By the Sea at 5:59 PM