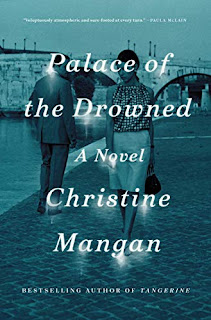 ONE SENTENCE SUMMARY:  A slow-building, dark, suspenseful story about a now disgraced author.

BRIEF REVIEW:   This novel tells the story of Frances "Frankie" Croy,  a 40-something author who enjoyed much success with her first novel.  The years have passed and her latest novel hasn't resonated as well with her readers.  Frankie hasn't handled criticism of her work very well thus far and after a public breakdown in London, following a particularly critical review,  she knows she needs help and checks into a clinic for a short stay.  When her friend Jack (female) suggests that she take advantage of a family palazzo in Venice, known as "The Palace of the Drowned", Frankie agrees in hopes to regroup and refocus.

Shortly after Frankie's off-season arrival in Venice she meets Gilly at a market. Gilly claims to be a fan and reminds Frankie that they've met previously but, Frankie does not recall this. Before long the 26 year old Gilly is arranging a coffee date for the two of them and finding more and more reasons to spend time with Frankie.  What's her real agenda here?

This story was a slow build and took me a while to get invested. Frankie is a loner and also a drinker. She's unstable, unreliable and pretty unsympathetic too despite the fact that she survived a traumatic incident when she was younger during WWII. I found Frankie tough to connect with at times.  Gilly sent up red flags from the initial meeting and I was curious to find out what her real motive was for wanting to get close to Frankie.  The story itself is very atmospheric, deserted Venice, the fog and rains, eerie noises, everything just seems off, uncomfortable and tense. I liked the Venice, mid-60's setting and thought the ending was satisfying.

The story seemed to demonstrate just how very much a writer's success and reader following is dependent on readers and their reviews. A successful debut novel doesn't necessarily guarantee future high praise from fans.

I enjoyed this author's debut novel, Tangerine (2018) set in Morocco and although this wasn't quite as good IMO, I still was happy I tried it.