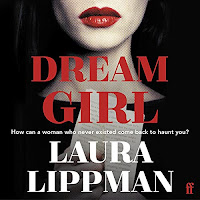 ONE SENTENCE SUMMARY:  A  suspenseful yet witty thriller about an author who lacks self-awareness.

BRIEF REVIEW:   Gerry Anderson is a 61 year old author who has experienced success. His book "Dream Girl" starring a woman named Aubrey McFate made him an instant success with his fans.  The fans felt Aubrey was based on a real person the way she seemed to come alive on the pages. Gerry does have three former wives and some 37 lovers but, who's counting?  He recently moved from New York City to high rise penthouse in Baltimore to be near his mother who had dementia but, she passed away soon after the move.  Now he's trying to write the memoir his publisher is looking for but, he's having trouble focusing.

Now he finds himself confined to a bed for 8-12 weeks after tripping over a rowing machine, slipping on the concrete floor and tumbling down a floating staircase where he lay until his assistant arrived the next morning.  With an assistant with him by day, a nurse by night and lots of pain meds, Gerry is dazed and confused and confined to bed with a brace.  When calls and emails from a woman claiming to be Aubrey begin and Gerry even claims to have seen Aubrey in his penthouse he begins to wonder whether someone is playing a trick on him or was there an Aubrey in the past that really inspired the woman in his book.

This story is both suspenseful and witty, I caught myself frequently smiling especially with the audio version which was read by Jason Culp. He did a great job with the Gerry character.  Gerry is unlikeable for sure but he was such a fun character in that he totally lacked self-awareness.  It was hard not to feel for him at times. Honestly, all of the characters were unlikeable and that usually spoils a book for me but, not this one. It wasn't perfect but in addition to the clever storyline, I liked that there were references to other books and movies and mostly that the story just put a smile on my face. Overall, a good read and maybe a better listen!

Thanks go to  William Morrow, Edelweiss and my public library for allowing me access to this delightful book in exchange for my unbiased review.

Posted by (Diane) Bibliophile By the Sea at 9:30 AM