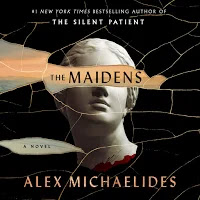 ONE SENTENCE SUMMARY:  A dark engrossing psychological thriller with a surprising climax.

BRIEF REVIEW:   Mariana Andros is a group therapist in London who is still mourning the loss of her husband Sebastian the prior year. She also has a patient who has been stalking her.  One day she receives a panic call from her niece Zoe who attends the university in Cambridge.  Zoe's friend Tara has been brutally murdered .   Mariana is Zoe's guardian and wants to be with her so she drops everything and takes a train to be with her niece.

The murder of Tara is reminiscent of a Greek tragedy  and Mariana learns that Tara was a member of a secret campus group called "The Maidens."  It's a select group of beautiful, confident young women led by the popular and handsome Professor of Mythology, Edward Fosca who  soon becomes a prime suspect.  Mariana begins to snoop around and then another girl is dead, murdered in the same brutal fashion.  Mariana is sure Professor Fosca is involved somehow.  The local police are getting annoyed by Mariana and tell her to stay out of their business but, she's not giving up that fast. Then one day she receives the same type of postcard with a Greek tragedy quote as the other dead girls had received and, things heat up from there leading up to a surprising and satisfying ending.

There were several things I loved about this book. It had several suspicious characters, and number of red herrings to throw the reader off track. It also had a couple of familiar characters from The Silent Patient as well, but, this could certainly be read as a stand alone novel.  The audio book was fantastic with dual narrators: a female for Mariana's third person POV and a male voice of a deeply disturbed, possibly psychotic (unknown) man with troublesome childhood memories.  Although this one took a bit to get going, a slow-burn,  it quickly escalated into high gear. I was blown away with the final reveal.

I loved this author's last novel The Silent Patient so I couldn't wait to try this one.  If it hadn't been for the graphic events involving sheep and then a family dog, this would have been a perfect read for me. Why do authors need to spoil a good book by introducing a shock factor involving animals? I felt I had to take off a star because of this.

Thanks go to Macmillan Audio and NetGalley for allowing me to download this audiobook  at no cost in exchange for my unbiased review.