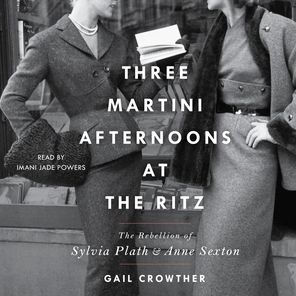 TITLE/AUTHOR:  Three-Martini Afternoons at the Ritz: The Rebellion of Sylvia Plath and Anne Sexton; Gail Crowther

ONE SENTENCE SUMMARY:  A fascinating story  two brilliant female poets both tormented by self-doubts and thoughts of suicide.

BRIEF REVIEW:   Having read The Bell Jar several times,  I thought this might be a good opportunity to learn more about Plath's brief life.

Sylvia Plath and Anne Sexton were brilliant and complex women.  The two poets met by chance at a writer's workshop lead by Robert Lowell at Boston University in 1959.  The two women formed a fast friendship meeting at Boston's Ritz Carlton for several martinis after each class.  Their discussions were not only about writing and poetry but ventured into bolder conversations like relationships, sex and even talk of suicide.  When the workshop had ended their friendship did not, although Plath remained in Massachusetts, Sexton moved to England yet they stayed in touch through correspondence.

Both women were progressive in a time when it was not acceptable. Neither woman was content to stay home, raise children, cook, keep up the house, entertain or to remain a silent partner.  Both were troubled with mental illness and thoughts of suicide.  While Plath committed suicide at 30, Sexton had several failed attempts before finally ending her life at 45.

Although I knew a lot about Plath's short life, Sexton's background was a mystery to me.  Each of the women had different parenting styles and upbringings and while Plath was organized and methodical Sexton was disorganized and had more of a fly by the seat of your pants outlook.   I thought the author did a good job comparing and yet, contrasting each woman in a way that never felt too heavy or too superficial.  The treatment methods for depression in years gone by were somewhat disturbing. The dual biographies on audio worked well  and was narrated by Imani Jade Powers .   I did missed out on the pictures which were included in the print edition. I thought the chapters flowed well and were well organized: Rebels, Early Days, Sex, Marriage, Mothering, Writing, Mental Illness, Suicide and an Epilogue.  Recommended for readers interested in a well-researched literary biography.

Thanks go to Simon & Schuster Audio for allowing me access to this audio book in exchange for my unbiased review.

Posted by (Diane) Bibliophile By the Sea at 7:45 PM