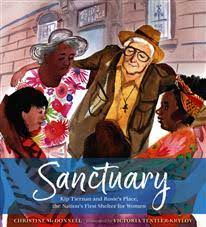 Sanctuary, Kip Tiernan & Rosie's Place: The Nation's First Shelter for Women
Christine McDonnell and (Victoria Tentler-Krylov, Illustrator)
Candlewick Press - 2022 - (ages 7 - 10)
Kip Tiernan grew up during the Great Depression learning early on from her grandmother that it was important to help people who had nothing.  Kip's grandmother, who had 10 children of her own, would make large vats of soup so that when hungry people would knock on her door asking for help because they were out of work, they could count on a bowl of soup to help sustain them.
In 1968 Kip would also feed the hungry at a shelter called Warwick House located in a poor Boston neighborhood. Kip noticed women dressed as men stopping for some food.  At that time it was believed that only men were homeless.  She began noticing women sleeping on park benches and scavenging for food.  Kip spent several days at St Josephs's House in New York City talking to people about their situation.
Kip, like some of the women she met, overcame alcohol addiction in her 20s. She was determined to help other women. She wanted to open the first shelter for women in Boston where women could come for food and shelter. Her job getting this dream off the ground wasn't easy and, she met obstacles getting others to buy into the idea but on Easter Sunday in 1974 her dream came true - Rosie's Place opened as the first women's shelter in the US.
Sanctuary, is a wonderful book, beautifully illustrated as well,  about the importance of people helping people who are less fortunate.  The author was a former educator at Rosie's House.  The story is tastefully done and informative for middle grade children (younger in some cases) and adults as well.  Highly recommended for both school and public libraries as well as personal collections.

Thanks go to Candlewick Press for sending this lovely book my way in exchange for my unbiased review.
Posted by (Diane) Bibliophile By the Sea at 7:37 PM