Book Review - We Begin at the End, Chris Whitaker 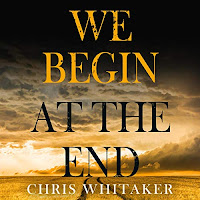 TITLE/AUTHOR:  We Begin at the End, Chris Whitaker

ONE SENTENCE SUMMARY:  A well-plotted crime fiction thriller with characters that are hard to forget.

BRIEF REVIEW:  For me this isn't an easy book to review but the story is amazing. As the title seems to suggest, this story did not really "begin at the end."  It does involve an accident that killed Sissy Radley, just seven years old at the time. Sissy was killed 30 years earlier when Vincent King was just 15 years old. He spent three decades in prison and is scheduled to be released.  Vincent was the best friend of now Cape Haven Police Chief Walker (Walk), and Walk has never given up on his friend even though he testified against him.  The death of Sissy all those years ago deeply affected her older sister Star and messed her up for life.  Star was the girlfriend of Vincent at the time.  Now Star, mother of Dutchess Day thirteen, and Robin six, is unable to function due to her depression and addiction issues.  Dutchess "Outlaw" Radley becomes the protector and mother figure to her young brother Robin. She's also bent on revenge for all who have done her and her family wrong.
Dutchess and Police Chief Walk are the primary characters of the novel but, there are several others who play a role in the story.  Walk is a good man and loyal to many.  Dutchess, is tough, foul-mouthed and fearless on the outside yet soft and compassionate when it comes to her young brother Robin.  Sadly, she has been denied the opportunity to be a child herself.  SHE is clearly the strength of this story, an unforgettable character and, my heart went out to her and her situation.
A slow moving and intricate story, it is one where you really get a chance to know each character.  I loved the descriptiveness of the small town and the sense of community. Some of the characters are so caring and others frightening.  Most of the characters were broken in some way or seriously flawed but, they came across as genuine as well. Told in multiple POV, both in the past and present,  at times I wished that I had the print edition instead of the audio.  George Newbern, did a decent job as narrator but, a few times I wondered who was speaking.  This is a story that will stick with me for a long while, likely to make my 2021 tops list as well.
RATING: 4.5/5 stars

MEMORABLE QUOTES:  There are two kinds of families: the ones we are born into and the ones we create.