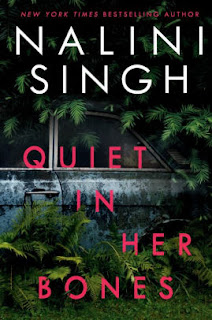 ONE SENTENCE SUMMARY:  What happened to socialite Nina Rai who disappeared without a trace one stormy night?

BRIEF REVIEW:  Aarav was sixteen years old when his mother Nina disappeared along with $250,000 from a safe in the home.  Even though his parents had a rocky marriage, he and his mother had a special bond.  Aarav has been obsessed with his mother's disappearance from their wealthy enclave ever since that stormy night a decade earlier.  He recalls a few details from the night she disappeared:  his parents argued, there was a loud scream and he heard two slams of the front door before her car drove off.  Now ten years later, Aarav 26, is a successful thriller author and living back at the family home while recovering from multiple injuries after a car accident.  His father, step-mother and half-sister also live in the house.  As he is settling in the authorities show up saying they've discovered Nina's car, a green Jaguar, her ID, as well as her bones along with the clothing she wore the night she disappeared.  Still obsessed with knowing more about what happened to his mother, he begins his own private investigation.
So what really happened to Nina Rai, a woman who drank too much, had problems in the marriage, engaged in extramarital affairs and had multiple enemies?
This story drew me in early on and I couldn't turn the pages fast enough.  The New Zealand setting was gorgeous and interesting to read about.  Told mostly from Aarav's POV,  the problem is is also an unreliable narrator and self-proclaimed sociopath.  He's on pain meds for migraines, a recovering alcoholic, has confusion from a head injury and is in psychotherapy as well.  In addition to Aarav's POV, he conducts numerous interviews with neighbors and their hired help to aid in his private investigation.  I found everyone in this story unlikeable with the exception of the stepmother and half-sister who I felt badly for as Mr. Rai is a piece of work himself.  It's seems the wealthy neighbors have plenty of secrets as well.  There were plenty of red herrings to throw the reader off track and while this story started out strong, it slowly got bogged down with too many people being questioned and a good deal of minutiae.  I had high expectations for this one but, in the end I found myself a little disappointed.
RATING: 3.5/5 stars
Posted by (Diane) Bibliophile By the Sea at 6:00 AM