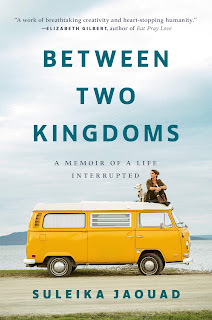 ONE SENTENCE SUMMARY:  A memoir of a young woman's five year battle with acute myeloid leukemia and her subsequent return to the life of the living.

BRIEF REVIEW:  Shortly before Suleika Jaouad's graduation from Princeton something was not right. It began with an itch on her feet and legs that only got worse. Soon bloody oozing scars from constant scratching appeared and she was tired all the time.  All this as she moved to Paris for a journalist's position as a war correspondent along with her boyfriend Will.  Her time in Paris was short-lived as constant fatigue set in and blood work raised red flags and, shortly before her 23rd birthday she was back home with her parents in Saratoga Springs, NY.  Diagnosed with acute myeloid leukemia which was attacking her bone marrow, she was given a 35% chance of survival. Her long stays at Sloan Kettering and grueling treatments which included a bone marrow transplant from her brother were just the beginning. She tries to stay positive and begins to document the process in an open and very honest manner. She even had a column in the NY Times.
Despite how difficult her cancer ordeal obviously had been, once she gets to begin living her life once again proves almost as difficult.  In a 100 day cross country trip with her dog she connects with many of the individuals who showed concern for her or who shared their personal stories with during her lengthy journey.
This memoir is extremely well-written but, it took me a long time to finish as I found I could only read in small doses.  I'm glad I tried this one and, obviously, she was one of the lucky ones - she beat the odds.  It did make me feel for all the individuals who were not as fortunate as Suleika.  She had an excellent family support system and financial concerns never seemed an issue.  Her parents also had a place in NYC as well as Saratoga Springs so they were able to be with her and, she was able to continue on what seemed like an excellent health insurance plan that her father had.  A well-written memoir but difficult to read.
RATING:  4/5 stars
Posted by (Diane) Bibliophile By the Sea at 12:00 AM