Book Review - The Boy in the Field; Margot Livesey 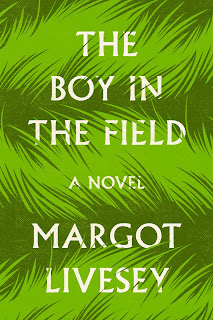 TITLE/AUTHOR:  The Boy in the Field; Margot Livesey

ONE SENTENCE SUMMARY:  A tragic incident involving a teenage boy and its after effects on (3) teenage siblings who helped to save his life.

BRIEF REVIEW:  When the Lang siblings: Matthew 17,  Zoe 16, and Duncan 13, decide to walk home from school one day after their father Hal failed to pick then up as planned, they notice a bloodied body in a field along the roadside.  Their quick action in summoning help saves the life of another teen, Karel Lustig, who had been left for dead.   What happened to Karel and who was responsible? How will the siblings be affected by what just happened?
More than answering the question of who committed a crime against another, this is a story of how each of the siblings were affected by a crime against someone their own age.
Matthew the oldest is an avid crime buff who begins his own investigation, learning more about the victim and his family through the boy's old brother.  Zoe uncovers some truths about her father and begins to obsess about the potential of adults to be more dangerous than they appear to be.  Finally, Duncan, the third sibling who was adopted as an infant, becomes intent on finding his birth mother.  He exhibits both artistic abilities and traits of some individuals on the spectrum. Duncan's  an especially keen observer of even things that seemed insignificant.
This story really drew me in early on.  I loved the quiet quality of the writing and the keen observations throughout.  It's a story about family, imperfect parents, flawed adults, secrets and the bond of siblings.  Each chapter gives the perspective of one of the siblings in the months following the tragedy.  The "incident" or mystery of what happened to Karel seemed less of a focus in comparison to how the siblings were affected by what had happened.  I think the author did a good job but, wished the ending hadn't felt as rushed.
The audiobook was narrated by Imogen Church who did a very good job.
RATING: 4/5 stars
Posted by (Diane) Bibliophile By the Sea at 6:30 AM