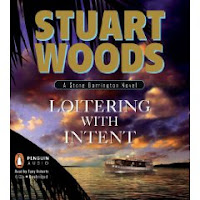 Stuart Woods was one thriller writer I always looked forward to, especially his Stone Barrington character novels. Let me just say, IMO since Woods has started producing three books a year, the quality of his books has declined.

Loitering With Intent is a fluff-filled, thriller, with a twist that is not really a twist, Stone Barrington is at his favorite hangout in New York City, when Bill Eggers brings him a client, Warren Keating, who’s hoping Barrington can track down his son Evan, so that he can sell the family business. His son's signature is required to accomplish this.

Since it is winter in NYC, and this assignment is in Key West, Florida, Stone and his buddy NYCPD Dino Bacchetti head for the Florida Keys. When he finally tracks Evan down, he refuses to sign the off on the deal that is worth some $20 million. Before he can press the issue, Stone gets injured by Evan's protective girlfriend, Gigi. Then in typically Stone Barrington style, he ends up in bed with Annika Swenson, a beautiful Swedish doctor who examines his head wound. Still in pursuit of Evans, when he finds him Stone learns that Evan's father Warren may be up to no good. Stone agrees to help Evan, and of course, this decision is one he'll begin to regret.

This audio book was read by Tony Roberts, who does a good enough job with the NY accents, and playing the role of Stone Barrington, dry humor and all. If you feel the need to waste some time, on a boring thriller with little substance, and you don't mind swearing and sexual escapes, then try this book. My recommendation: "Too many books, too little time" to waste on this one.
Posted by (Diane) Bibliophile By the Sea at 10:48 PM