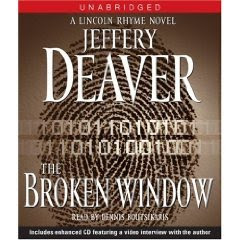 Lincoln Rhyme has his work cut out for him in this Jeffery Deaver book: The Broken Window. For readers who are not familiar with the Lincoln Rhyme character, he is a NY City forensic specialist; he is also a paraplegic. He is intelligent and testy.

The Broken Window is a story about a high tech version of identity theft taken to the extreme. It is not just someone who just steals your money, but one who assumes your identity to commit awful crimes using your name.

This master criminal thinks that he has what it takes to pull off repeated "perfect crimes" without getting caught, as he's been getting away with it forsome time. He sees his victims as numbers. The killer is dubbed UNSUB 522, by Rhyme, because the first known crime happened on May 22.

This killer made a one big mistake. He has framed Lincoln Rhyme's cousin, Arthur Rhyme, for murder. The evidence looks like Arthur may have been responsible, but, there is no way that he could have possibly murdered the first victim, Alice Sanderson.

Rhyme investigates the evidence against his cousin to see if he can uncover any mistakes by police, but he discovers something worse. They are dealing with a computer genius who also happens to be a sociopath. As Rhyme and his staff work on the crime, they discover a business that collects every bit of available information about every man, woman and child in the US. They know where you were, what you did, what you bought etc, and the fact that a sociopath has access to this data, makes everyone wonder...just who is safe?

The Broken Window was a very long audio book ( 12 cds)  read by Dennis Boutsikaris, who always does an amazing job. A good thriller with a clever, engaging plot, but probably not the best type of book to listen to each night before bed like a did, given the fact a sociopath, is at work. Recommended
Posted by (Diane) Bibliophile By the Sea at 10:32 AM