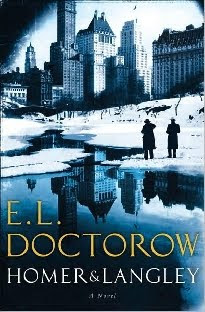 Homer & Langley, by E.L Doctorow, is a work of fiction based on the lives of the infamous Collyer brothers. The decaying bodies of these eccentric bachelors were found beneath mounds of rubble in their upper west side, Manhattan home in 1947. It was reported that some 100 tons of junk had to be removed.

In this story, Homer & Langley were born to prominent parents, who travelled a lot, entertained a lot, and filled their four story brownstone with "stuff" acquired in their travels. Oftentimes, trunks full of merchandise arrived by rail at their home before their parents did: ancient Islamic tiles, marble water fountains, busts of Romans without noses or ears, and the list goes on and on.

The story is narrated by Homer as he tapped away on his Braille typewriter. Homer was a handsome young man who gradually becomes blind in his teens. Women felt sorry for him. He attended the West End Conservatory of Music and became somewhat of a pianist prodigy. Despite his blindness, Homer is an excellent reporter of what everyday life is like for him as a blind person. He had exceptional hearing, "which he trained to a degree of alertness that was almost visual".

Langley was two years older. He went off to WWI and was ambushed with mustard gas. While he was away both parents, who were in their 60's, died within weeks of each other of the Spanish influenza. Homer was alone except for the house staff: a cook, a butler and two maids.

When Langley returns from war he is a changed man, and not for the better.

(Langley's Theory)..."Everything in life gets replaced, we are our parents replacements just as they were the replacements of the previous generation".

(Homer)...."At that point I understood what Langley called his Theory of Replacements was his bitterness of life or his despair of it".

Langley becomes obsessed with acquiring things: he buys every single newspaper that is published each day, and never throws anything away. He brings home, a fire hydrant, spare parts, a Model T car for the dining room, multiple televisions, and more and more junk as time progresses. Homer must learn to navigate around all this stuff. At one point, Langley had enough of television, and unplugged it once and for all. His view on television was this:

" When you read, or listen to the radio, he said, you see the scene in your mind. It's like you with life Homer. Infinite perspectives, endless horizons. But the TV screen flattens everything, it compresses the world, to say nothing of one's mind. If I watch anymore I might as well take a boat down the Amazon and have my head shrunken by the Jivaro".

This was one tough book to try to review! I was expecting to love this book, but I didn't. It was easy to put down and harder to pick up again. Don't get me wrong, I didn't hate the book, but it took me almost 100 pages to get into this book, and it was just over 200 pages to begin with. Normally I would dump a book before that, but I was sure this one had to get better. It did get better as the reader was given some insight as to how these reclusive brothers, Homer & Langley perceived the world that they chose to withdraw from.

Recommendation - ?? You read it, and decide! 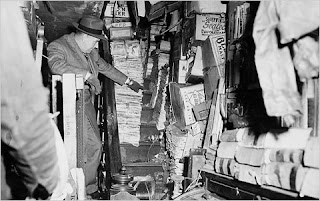 Posted by (Diane) Bibliophile By the Sea at 8:54 PM