112 - You Don't Look Like Anyone I Know; Heather Sellers 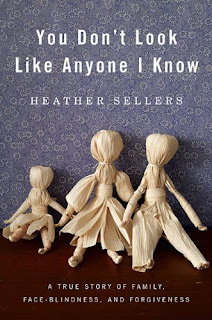 Heather Sellers has written an eye opening memoir about her life with "face blindness".  Prosopagnosia, is a rare neurological condition that affects about 2% of the population. Although we all sometimes have trouble recognizing faces, people with face-blindness often have difficulty recognizing people that they have met many, many times. In extreme cases, those with Prosopagnosia, may even have difficulty recognizing people that they spend the most time with such as their spouses and their children. Studies have shown that head injuries are a possible cause of this disorder, and the author had been involved in a serious car accident, suffering a severe concussion and memory loss. However, she believes that she had face recognition issues long before that accident, and believes she was born with this disorder.

Her childhood was not normal....."things had been so chaotic in the household. I've been overexposed to stressful weirdness and underexposed to friendships, neighbors, television, movies. I'd hadn't really noticed anything was wrong until I was in high school, when I went to the same school, finally for a couple of years in a row. That's when I realized: I really don't know these people. I thought it was a sign of mental illness."

Heather's childhood was not normal by any means. By the third grade she attended six different schools. The shy, perpetual new girl seemed to always be trying to figure out who everyone was.


" I wasn't worried about not fitting in with the other kids. I was worried about how I didn't fit in with my family. When I watched other kids playing, I wasn't wishing for friends, I  wondered which ones had mothers who would adopt an extra girl".

Heather was 38 before she came to the realization that her mother was mentally ill, although never formally diagnosed. She exhibited signs of schizophrenia and paranoia for as long as Heather could remember. When Heather lived at home, her mother had nailed windows shut and covered them with blankets, and made her walk on her knees to protect the carpeting. She was also overly critical of Heather. When Heather was a grad student teaching a class on Hemingway's short fiction, her mother promised to sit quietly in the back of the class, but instead she interrupted, contradicting what her daughter had said, and later handing her a numbered list of (23) things she needed to improve on. The list included such things as the number of times she had said "um".


"I wasn't going to survive if I stayed with her. I was turning primitive. I was starting to eat paper again, like Ricky Spees. I had to have paper in my mouth all the time . I was beginning to crave rocks under my tongue. I had looked up this affliction too, and discovered it had a name, history: pica, the craving of unnatural substances. It was rampant among the retarded. It was a sign I under duress. I was eating my Ticonderoga pencils. I was eating the metal. I knew I had to get away from her.........."


Her father Fred, also had his issues, an alcoholic who let drifters stay with them, went on "fishing trips" when his drinking was totally out of control, and wore lingerie under his regular clothes, and borrowed Heathers nail polish.

Her dysfunctional childhood in some ways carried to adulthood when she married Dave, a man with (2) young sons. She never lived with her husband, and the couple divorced two years later. She wanted Dave and his sons to meet her family. It was this road trip lead to an awaking, and a better understanding of herself, her situation, and why her parents acted the way they did.

MY THOUGHTS -  I've always enjoyed a good memoir, and this story fell into that category. The writing and sequence of events is scattered, and the story seemed more like a compilation of random thoughts and experiences of her painful past. Despite the random order of events, the story was very readable. The writing style worked, and I felt it made the experiences the author described all the more touching. Readers who enjoyed The Glass Castle

, by Jeanette Walls should enjoy, You Don't Look Like Anyone I Know