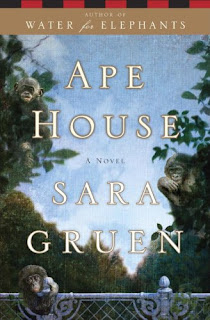 was a favorite book of mine, so when I heard about her new book, Ape House

, I couldn't wait to read it. The verdict.....it's good, but not as good as Water for Elephants

In this story Isabel Duncan is a scientist who has been working with Bonobo apes at at The Great Ape Language Lab in Kansas for many years. The apes: Bonzi, Sam, Lola, Mbongo, Jelani and Makena are language masters in the art of signing, and they also understand when humans speak to them. In addition to being intelligent creatures, they are compassionate feeling creatures, and this shows through over and over with their interactions with each other. Bonobos and humans even share 98.7% of their DNA. They are very playful, affectionate, and yes,  fond of sex.

John Thigpen is a journalist for the Philadelphia Inquirer, sent to cover a story about the apes, but when the language lab is bombed by a group of extremists bent on setting the apes free, all hell breaks loose --so to speak.  Isabelis severely injured in the bombing, but recovers, and John stays involved trying to recover the apes that have been set free, and to get to the bottom of the incident. Now this is where the story gets weird: the apes end up on a reality television show called Ape House in a remote area of New Mexico. A variety of subplots and a motley crew of characters are introduced to the reader: a pornography kingpin, Russian strippers, meth-lab members and their pit bull "Booger",  John's depressed wife Amanda, computer hackers, and more.

Despite all of the quirky characters Gruen introduces into this story, I never lost interest. As far out as the plot may sound, it all comes back to the sensitive, intelligent apes, and poignant moments written into the novel about them, that makes reading this novel all worthwhile.  Prospective readers should be aware that there are some disturbing parts regarding the endangered bonobo apes. However, the author's love for animals, in this well researched story, shines through over and over again. RECOMMENDED

Email ThisBlogThis!Share to TwitterShare to FacebookShare to Pinterest
Labels: 2010 Challenge Books, Books That I Liked