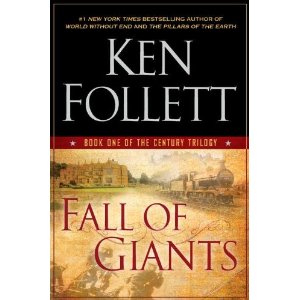 I've been on a bit of a Ken Follett roll, having just recently completed Pillars of the Earth

, which I LOVED. So needless to say, I was thrilled to be able to read and review, Follett's new, Book One of the new Century Trilogy, Fall of Giants

debuts on September 28th. What did I think? It is wonderful!

Book One spans a period of about 14 years, beginning in 1911 and covering the period before, during and after World War I. In this installment, five families: American, German, Russian, English and Welsh, all related in some way, must endure the effects of both the First World War and the Russian Revolution.  Without going into all the characters (I think I counted 12), or the entire plot of this mammoth work, I'll just mention a few of the key players. There is Billy Williams who is just 13 when he is off working in the mining pits of Wales. Grigori and Lev Peshkov are orphaned Russian brothers, whose lives take dramatically different paths in life. There's the Fitzherberts who are wealthy aristocrats, and Lady Maud, finds herself falling in love with a Russian spy. Ethel, (Billy's sister) is the housekeeper for the wealthy Fitzherberts, challenging class distinction by having an affair with the earl for who she works. Gus Dewar is an American Law student, and son of a US Senator who finds himself in the War Room of Woodrow Wilson's cabinet.

I'm extremely happy I didn't let the nearly 1,000 pages of this novel deter me. The pages practically turned themselves, and I was not disappointed. The review copy had a lengthy list of the cast of characters which was very helpful to refer back to. I am sure the finished copy will have something similar as well. There is a lot to take in with this novel, but I especially enjoyed reading about the underdogs of this novel: servants, miners, factory workers, and peasants alike. Class distinction is vividly portrayed. I thought all the info on WWI was interesting, and a lot to take in, as I am very rusty on this time in history. I liked that the author used some actual historical names in Fall of Giants

: President Woodrow Wilson, Winston Churchill, Kaiser Wilhelm, Lenin and Trotsky. By doing this, it made the story all the more engrossing and realistic. Another sweeping Follett epic, set in another place and another time - HIGHLY RECOMMENDED

This novel's release date is September 28, 2010. This book would be a great choice as an eBook selection for those who have an eReader. It can be tiring on the hands if you read and hold the 3+ inch thick book for long periods. DON'T MISS THIS ONE!