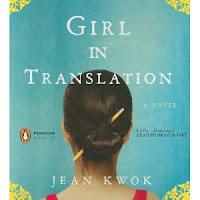 Kimberly Chang is only eleven year's old when she and her widowed mother left Hong Kong for the prospect of a better life in America. Her mother's older sister, Aunt Paula, is their sponsor. Aunt Paula gives Mrs. Chang a job in a  Chinatown clothing factory (sweat shop), so that she can pay off her debt to her.  Aunt Paula also finds Kimberly and her ma an apartment in Brooklyn. The building is in terrible condition, and the living conditions are just atrocious -- no heat, and rodents and cockroaches run rampant in the building.  In winter they must sleep on a mattress in front of the kitchen stove with their heavy coats on, to try and keep warm.

Kimberly was an excellent student in Hong Kong, however, in the US since she does not speak English, she is placed in a class with a group of underachievers.  She works hard to learn the language, and to try to earn the respect of her teachers and classmates.  Her math and science skills are superior and she was advanced two levels because of her intelligence.  She also gains admittance to a private school after her teachers see how smart she is.  Unfortunately, Kimberly faces a whole new series of issues at her new school, as she attends classes with students from extremely wealthy families.

For Kim and her ma, life is rough, but the two of them, never lose their drive and desire to succeed. The two of them stay in the horrible apartment for seven years, trying to make a life for themselves. Ma works hard to pay off their debt to Aunt Paula, and Kimberly helps out at the factory after school to help meet daily deadlines. Aunt Paula takes advantage of the fact that ma and Kimberly are fast workers, so she cuts her piece-work rate. To put into perspective just how terrible wages were, when Kimberly spent $1.99 to buy her friend a Christmas present, she described it as the amount they earned for completing 133 skirts at the factory (1980s).

I don't want to spoil the story by telling you how it ends - 20 years later. I'll just say that Girl in Translation

was a poignant, coming of age story about the immigrant experience in America. As I first read, and listened to the audio book, the story sounded more like a YA novel than an adult novel, but I think that was because the novel starts out with eleven year old Kimberly telling their story. I truly enjoyed the first person narration by Kimberly as she tries to master the English language, excel in school, and help her mother at the factory, deal with first love, and assert herself for that which she believe in. She was truly an inspiration and testament to hard work and determination. While in many ways Kimberly achieves the American Dream of immigrants in this country, the road getting there was anything but easy.

The audio book was excellent, read by Grayce Wey. It was great to see how Kimberly mastered the English language, improving each year that she was in school. The novel in some ways is reflective of the author's own childhood.  Jean Kwok's biography can be read HERE.  RECOMMENDED - 4.5/5 stars

Posted by (Diane) Bibliophile By the Sea at 8:29 PM