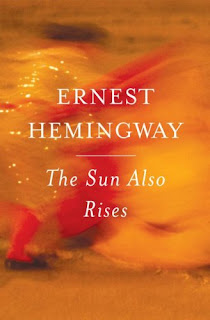 is a fascinating novel. I can't believe I hadn't read it years earlier. The protagonist, Jake Barnes, is a tragic hero of sorts. He was wounded in WW1 and his injuries rendered him impotent.  His injury deeply affected his psyche, and he is insecure about his masculinity as a result. The love of Jake's life is the beautiful Lady Brett Ashley, who cared for him during the war when he was wounded. She is a shallow woman, who cares for Jake, but will not commit to him because sex is very important to her. Instead Lady Brett spends her time with a variety of men. Jake, on the other hand, spends much of his time in Paris with his buddies, each drinking in cafes and wasting their lives.

The activities that Jake and his buddies engaged in were really quite sad.  They seemed like they never grew up, but instead their behavior was reflective of their wish to forget the horrors of the war.  They wandered rather aimlessly, a highlight being the fiesta and bullfights in Pamplona,  where the group engages in more drinking, dancing and debauchery.

This book was originally published in 1926, and its strength is definitely the style in which it was written. Hemingway's writing is sharp and insightful, and you feel every detail: the sight, sounds, the place. The characters, although flawed were sympathetic. I loved how he got into the psyche of the characters, helping the reader feel what their life was like, and why they made some of the decisions they did.  I thought it was rather ironic that the title, "The Sun Also Rises", which to me symbolizes a new dawn, a new day, really had no significance for Jake and the other characters in this novel. Rather they never moved on with their lives, stuck in time, as a result of the past. Hemingway seemed to truly understand the struggles and challenges that life handed his characters, and for that matter -- each of us. Some individuals are made stronger by adversity, but others are not. In the end though,  we rarely get everything we want in life  -- do we?

Email ThisBlogThis!Share to TwitterShare to FacebookShare to Pinterest
Labels: 2010 Challenge Books, Books That I Loved