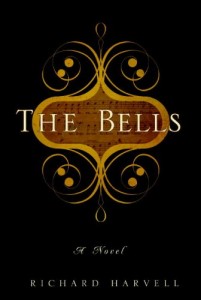 From the minute I first heard about this book, I knew I had to read it. The Bells

, tells the story of Moses Froben, who was born in a belfry to a deaf-mute, in a small, extremely poor village in the Swiss Alps in the 1700's. The villagers thought his mother was crazy, because she was skittish, dirty, and hid from the village people in caves or the belfry. She cared about nothing except her son, and her ringing of the bells every day. Moses as a young child, was allowed to live in the belfry with his mother because it was believed that since he did not speak, he was as deaf and mad as his mother. However, this was not the case. Since Moses had been exposed to the daily ringing of these loud bells from the time he was in his mother’s womb,instead of deafness, he was born with an extraordinary acute sense of hearing.

When Father Carl Victor learns that Moses can speak, the priest fears that Moses will be able to expose what he has for so long kept hidden. He tells Moses , “If God will not make you deaf, then I will do it”, and to keep his secret he tries to drown Moses in a river. When two monks, Nicholai and Remus, rescue the frightened boy, Nicholai names him Moses, “a fine enough name for a boy swimming in the river”. Nicholai promises to care of Moses. When they bring the young boy back to the monastery, the abbot tells them they must take Moses to the orphanage in Rorschach or they will be forced to leave as well.

From this point on Moses preternatural hearing causes him both pleasure and pain. Later he is  later taken to a new cathedral, the Abbey of St. Gall, and it seems that his life will improve. His performance in the choir makes him its prized singer. His keen sense of hearing and his love of music blossom, and he prepares for his first opera, but all this comes at a price.

Without revealing significant plot elements, I’d just like to say that this is truly a remarkable, unforgettable, historical debut novel. It is rare for me to read a story and be brought to tears, but this story had that effect on me. Told in the first person narrative, the sometimes touching, sometimes horrifying details of young Moses growing up, shall stay with me for a long while I am sure. The innocence of Moses as a child is so pitch perfect. The title of this novel was simplistic, but perfect, as The Bells

, and sound, were key elements throughout this story. In summary, I just can’t imagine any book moving me the way this one did. I will be a Richard Harvell advocate, as this is a book that should be read by anyone who enjoys a story of substance, one that evokes emotion, and one that you will talk about again and again -- an awesome choice for book clubs everywhere.