121 - We Have Always Lived in a Castle; Shirley Jackson 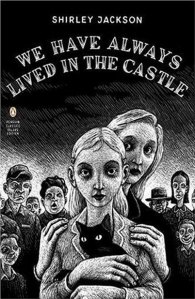 I think I am just about the only person out there who had not read Shirley Jackson's, We Have Always Lived in a Castle

. Well, now I have, and this 146 page book left me feeling a bit unsettled.  Creepy, atmospheric and beyond clever, this is one book that will leave some of you scratching your head when you get to the end.
In brief, Merrikat, as she prefers to be called, begins narrating this story in this way:

"My name is Mary Katherine Blackwood. I am eighteen years old, and I live with my sister Constance. I have often thought that with any luck at all I could have been born a werewolf, because the two middle fingers on both my hands are the same length, and I have had to be content with what I had.   I dislike washing myself, and dogs, and noise. I like my sister Constance, and Richard Plantagenet, and Amanita phallaides, the death-cup mushroom. Everyone else in my family is dead."

From the opening paragraph, I thought something is very strange about Merricat. She is eighteen and acts like a child. She is extremely superstitious, believing in signs and burying items in the ground to secure the property. She is also very protective of her sister.  She lives with her sister and Uncle Julius, who on the surface appears to have some sort of dementia. The three of them live in a secluded mansion, and never leave the house, except for Merricat who ventures into town for necessities about twice a week. It is clear that the townspeople fear and dislike the remaining family members. The Blackwoods avoid the neighbors, preferring the security of seclusion. They even avoid the few who are friendly.

Cousin Charles arrives on  the scene, interested in money that may have been left behind, and although he is an unlikable character, he is the only one who seems to be somewhat normal. How the other family members died is revealed as you read on.

So where is this story going? Well, before long it is very clear that Merricat is emotionally disturbed and not a reliable narrator, and that everything is not as it may have appeared early on. For a 142 page book, this one took me several days to complete as it was creepy, really kept my brain engaged searching for clues, and in the end left me wondering about Shirley Jackson, and what her life was like. I know that I will be interested in reading more by this fascinating author. Don't Miss This One!