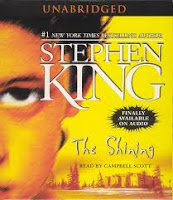 I first read The Shining back in the 1980's when it was first released, and loved it. Since then I've seen the movie at least (5) times -- my favorite time to watch it is on a snowy night day.  This time around for the #shineon, I am listening to the audio version which I am enjoying  -- on Chapter 32. This time around I'm not finding the book scary at all, but the movie, no matter how many times I've seen it still creeps me out in parts.. Jack Nicholson makes the movie, and that Wendy was creepy in her own way in the movie.

The book somewhat different from the movie, and I do like both versions, but the book is better, IMO, the two are different and the book is much more detailed. Based on what I've read/listened to so far (up to chapter 32). Here are some of the differences that I noticed so far (I'm sure there are more, but it's been over a year since I last saw the movie).

I feel that the book gives the reader more insight into a lot of elements of the story.  From animal shaped hedges in the book vs a maze of hedges in the movie and what happens around the grounds are different. The incident of the bees in the book is missing from the movie, and the role little Danny's imaginary friend "Tony" played is much more evident and clear in the book -- In the book he's mentioned frequently and plays a more significant role that made way more sense to me.  Also, the details about Danny's "shining" / visions are much more vivid in the book.

In the movie the use of mirrors happened a lot and "redrum" was easy to decipher immediately in the movie, where as, while listening the to the word "redrum" on audio book, had I not seen the movie or heard about it previously, would have left me curious until it was explained. Also,  I didn't remember the reference to the Mafia hits at the Overlook in the movie which were mentioned in the book.