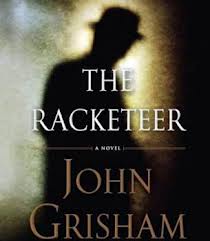 
In John Grisham's latest offering, The Racketeer, Malcolm (Mal) Bannister the story's protagonist was a black lawyer and former Marine serving a ten year sentence in a minimum security prison in Maryland. He has been charged with  money laundering, but claims he is innocent. Having served half of his sentence he is anxious to get out of prison and may just have his chance.

A Federal Court Judge Raymond Fawcett is found dead in his remote cabin at the lake; his secretary is also found dead there.  The cabin is so remote that unless someone knew it was there, it would be nearly impossible to find - electricity even. The FBI doesn't have much to go on in solving this case either.  Malcolm claims that he can help them, claiming he knows why the judge was killed and who may be responsible. Of course he wants something in return. He'll talk in exchange for Rule 35 (a reduction in sentence given to individuals for providing info which leads to the the arrest and prosecution in another case.

The story rolls out slowly and I found it interesting to listen to on audio; the narrator was J.D. Jackson who was very good.  I was curious how this story was going to end and I did like the surprise ending, but certain parts of the story were quite unrealistic. If you can suspend belief, give it a try.
Posted by (Diane) Bibliophile By the Sea at 10:21 AM