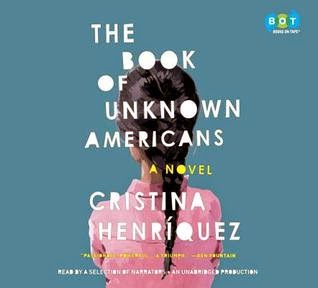 
The Book of Unknown Americans is a wonderful and what seems to be realistic story about the immigrant experience in the US.  It is likely to make my top reads list for 2014. Beautifully written and heartfelt, a story I will be recommending over and over again.

Arturo and Alma Rivera had a good life in Mexico, where Arturo owned a construction company.  One day their only child, Maribel, had a accident at the construction site for which Arturo felt responsible for.  A resulting head injury leaves the couple desperate to help their daughter who has experienced memory loss and is no longer the happy child she once was. When Arturo is granted a work visa to work on a large mushroom farm in PA, he jumps at the chance.

The opportunity  to give their daughter the best medical care possible and school advantages as well is worth the hard, menial work, long hours without lunch breaks which he must endure.  In the US the family lives in an apartment building in Delaware where other Latin American’s also live.  Though adjusting to life in a new country is difficult, they become friendly with another family in their building. The Toro family is also in the US legally from Panama.  The Toro’s have (2) boys, (1) boy is in college of a scholarship and the other boy, Mayor, still lives at home.  Mayor thinks Maribel is very pretty, but the fact that she has difficulty communicating, makes friendship difficult, but before long Mayor proves helpful in helping Maribel communicate.   However, lurking in the shadows is another American boy, who doesn’t have Maribel’s best interest at heart and, his actions cause justified reactions on the part of Maribel’s parents who are extremely protective of their daughter.

The story is told through the POV of both Alma and Mayor Toro, and the author does an awesome job demonstrating the struggles that the Latin-American immigrants experienced.  From homesickness, racial profiling, and the difficulties trying to adapt to a new way of life, each of their issues were heartbreaking.  I liked the fact the antagonists in this story were “white men”, which made the prejudices they suffered by these ignorant individuals seem very realistic.  There were other immigrants who had a small voice in this novel as well, each relaying what brought them to American and what they loved about the US.  I loved hearing their stories but do wish some of their stories were expanded a bit.

This author knows how to tell a story – from the hook early on and the wonderful voices of all, I found it difficult to put this one down for a breather. The audio book is read by a talented cast and I was happy that I had the opportunity to listen to this story.

(The audio book was provided by Random House for review).