This is the Story of a Happy Marriage; Ann Patchett 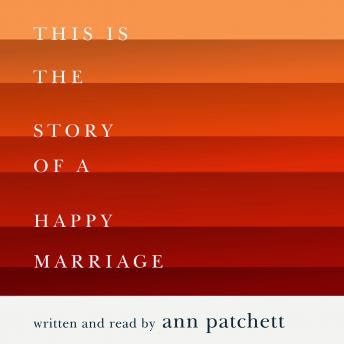 This is the Story of a Happy Marriage; Ann Patchett
Harper Audio - 2013

Although I've enjoyed Ann Patchett's novels in the past, when I heard that her last book was a collection of essays, I wasn't as anxious to rush out and read it. Silly me. After reading several glowing reviews, I got a copy of the audio (read by the author) and I was pleasantly surprised. It's very good.

The books is a story of some 22 essays that felt very intimate. The author talks about how she knew early on that she wanted to be a writer, even though she suspected that she'd never make enough money to pay the bills. She supplemented her income with waitress jobs as needed, but the lack of money never deterred her from doing what she loved. Most of the essays were written over a 20-year period and many appeared in literary journals and magazines.

Patchett talks about the fact she got married at 24 and knew even before the ceremony that she was making a huge mistake. She talks about her divorce after just one year of marriage, and an eleven year relationship and eventual remarriage.  One particular story that moved me was one about her relationship with her grandmother and how she took an active care-giving role when she suffered from dementia. Another story, one I was very familiar with, was about her long friendship with Lucy Grealy, who was stricken with a rare form of cancer at an early age. A cancer which left her disfigured after having most of her jaw removed and over 50 different surgeries. Patchett's 2004 book, Truth and Beauty: A Friendship, was a gut-wrenching story about their friendship, what Lucy had been through and her early death from a heroin overdose.

I also liked when the author tells us how a Catholic school nun named Sister Nena made a significant impact on her life when she was quite young. The author also reflects on her rescue dog, Rose, and their relationship in which she wheeled the aged dog around in a stroller when she could no longer walk, because she wasn't yet ready to say goodbye to her.  The essays are all very personal, autobiographical in nature and often infused with both humor and emotion. I enjoyed some of the essays much more than others,  and I found listening to the entire collection was a very positive experience.  I highly recommend the audio book for this one. The author's voice added so much to the experience.