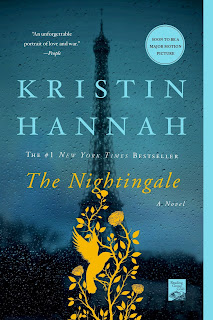 ONE SENTENCE SUMMARY:  A powerful story of two very different sisters and how their lives were impacted during WWII.

BRIEF REVIEW:   The Nightingale,  begins in 1998 Oregon with an elderly, unnamed woman sorting through papers and reflecting on her younger days as a young woman during the war.
Vianne and Isabelle are sisters whose lives take different paths after their mother died. Vianne, significantly older, marries Antoine and the couple and their young daughter Sophie move to the French countryside of Carriveau.  Isabelle had attended boarding school and when old enough to go it alone, the fearless, rebellious and independent Isabelle moves to Paris.
As German troops move into France and war breaks out Antoine is called to serve and, in the countryside, everything changes for Vianne, a teacher, and daughter Sophie.  As the Germans infiltrate the countryside and one Nazi forces his way into her home, her instincts as protector of her young daughter kick into high gear and she must do what it takes for them survive the ordeal of war.  Meanwhile, Isabelle recovering from a love loss refuses to sit idly by as the brutal Nazi occupation grows, she joins the resistance movement, constantly putting her life at risk with every move she makes.
The strength of this novel, IMO, was not in the way in which it depicts the war, although the second half of the book was darker and more intense.  I still thought the war aspect felt mild in terms of describing the brutality and horror of war.  The author's strength was in the wonderful job she did describing how each sister was affected by war and what they had to endure and the sacrifices they made while the men were called to serve.  The women were often faced with agonizing choices and the utter strength and bravery shown by the sisters and other women made each of them heroes in their own right.
A story of both survival and loss and ultimately redemption, based in part on a Belgian woman who inspired the role of Isabelle (The Nightingale) in the war effort.  I throughly enjoyed reading this novel and have gained a new appreciation for historical fiction in 2021 - my 9th book in this genre thus far.
RATING:  4.5/5  HIGHLY RECOMMENDED

"It's not biology that determines fatherhood. It is love."

Posted by (Diane) Bibliophile By the Sea at 8:30 PM